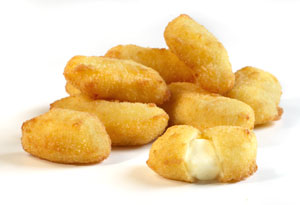 What’s a Curd? I get asked this all the time when I travel from state to state from folks of all genders and opinions. And I have to laugh when they compare the Curd to the Kurd. Once when selling in the great state of Arkansas, I encountered a whole slew of folks who had an opinion all right about those “Kurds”. “You can’t eat Kurds”, they told me. “Kurds are those people from northern Iraq living out in their tents freezing their tales off”, they told me.

Cheese Curds come from MILK. Milk comes from cows. Cows make milk by eating grasses and then mankind collects it from the cows. The cows like it. I’ve had discussions……never mind. It’s a Wisconsin thing. The creameries  homogenize and sterilize the milk so we can eat it as curds when it’s all done. And Riverside Foods, a Wisconsin company, I wanna tell ya manufactures the fresh cheese curds into breaded and battered cheese curd appetizers. There now, curds are as natural as it gets.

Cheese Curds are really good when they’re fresh. You get this squeak when you bite into them. Breaded or battered cheese curds deep fried or baked are ooey, gooey 100{99169ffa410f0de1782b4a88223ae28621eb59504fd4426e3dbe55e73599c86a} pure Wisconsin Cheddar cheese served hot in a light golden coating. What could be better as an appetizer or topping to your favorite sandwich? And you can get them all over the place like A & W All American Restaurants, Dairy Queens, Papa Murphy’s to name a few.

And up here, Curds are about as famous as The Green Bay Packers. Just about every fair and restaurant in Minnesota and Wisconsin has breaded or battered cheese curds on their menu. And if you don’t, well, let’s just say that you are either lacking in taste buds or you have been talking to too many cows.

Go have yourself an order of Creamy fresh white cheddar cheese curds and enjoy the ride.